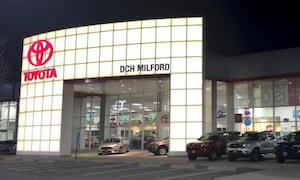 Greg Holway, General Manager of DCH Toyota of Milford, was assigned to the store shortly after it was acquired by the Lithia Automotive Group. According to Holway, many aspects of the store were in need of improvement, including its online reputation. “The ratings were as poor in Service as they were in Sales,” stated Holway.

Click the button below to continue reading about DCH Toyota of Milford's success.